Relative Entropy for Fun and Profit

Variational methods for Bayesian inference have been enjoying a renaissance recently in machine learning.

Problem: normalization can be intractable when applying Bayes’ Theorem

Given a likelihood function and a prior distribution that we can evaluate,

is the joint likelihood.

The posterior is just

where we divide by the evidence

is frequently intractable. For example, it may not admit a closed form solution, and it is frequently high-dimensional, so even numerical methods like quadrature may not help much.

Here are three techniques we can use to approach it:

Start with the KL from

, and rearrange to isolate the interesting quantity

so we can pull it out of the expectation:

Because we saw previously that

is the evidence lower bound (ELBO). It is a functional of the approximating distribution

. However it is equal to

at its maximum, when

We have transformed the problem of taking expectations into one of optimization. Now a new question arises – is this problem any easier than the integral we started with? Not necessarily! However we can now make different choices for the form of

, so if we can find a family of distributions that is amenable to our available optimization techniques and which also contains a good approximation to the true posterior, we will be happy with the trade-off.

For example, we can rewrite

in terms of yet another KL divergence, this time between the approximate posterior

on the latent variables:

have the same form – for instance we have chosen them both to be Gaussian – then the second term will have a closed form expression, so if we have a good way to evaluate the first term, as in Kingma & Welling 2013, then we’ll be able to optimize

and solve the problem.

(This bound gets its name from the variational principle, applying the calculus of variations to optimize the function

without assuming a particular form. However, we frequently assume a fixed-form approximation using a parametric form of this density. In this case no calculus of variations is required, and the problem reduces to an ordinary optimization.)

Non-negativity of the KL Divergence 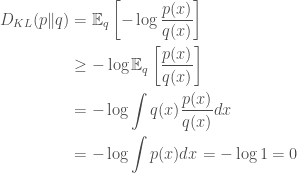 Furthermore, the KL divergence is just one member of a more general family, the Csiszár

-divergences. These have the form

for some convex function

. The same argument applies here (noting that the lower bound is now

, so this will only translate into non-negativity for particular choices of