Relative Entropy for Fun and Profit

It’s widely known that the KL divergence is not symmetric, i.e.

But what’s the intuitive picture of how the symmetry fails? Recently I saw Will Penny explain this (at the Free Energy Principle workshop, of which hopefully more later). I am going to “borrow” very liberally from his talk. I think he also mentioned that he was using slides from Chris Bishop’s book, so this material might be well known from there (I haven’t read it). 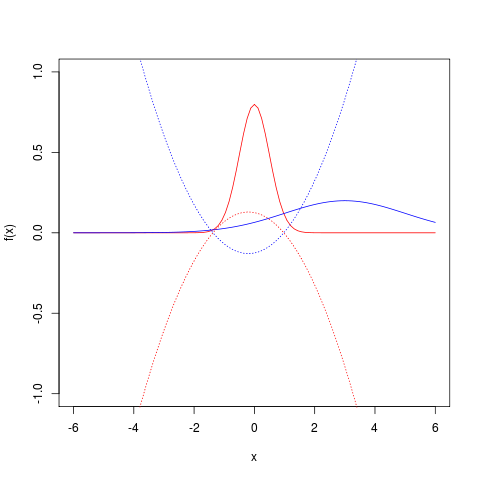 in red and a wider distribution

in blue. You can also see the (scaled) quantity

in red, and its inverse in blue.

is the expectation under the red pdf of the red dotted line, and

is the corresponding expectation for the blue pair. A couple of observations reveal two sources of disagreement between them:

Say we have a multi-modal distribution

and want to approximate it with a simpler distribution

– we’ll use a single Gaussian – by minimizing the KL divergence.

We can choose to minimize either

. Penny’s claim is that:

In the first case, the approximating density

can choose to “ignore” troublesome parts of the target density

which are difficult to fit by reducing its variance. We’ve seen above that the tails will receive little weight and can’t affect the divergence much.

In the second case, the expectation is taken under the target density

has to try to accommodate the whole thing as best it can, multi modes and all.

(Once again David MacKay’s wonderful ITILA book has some interesting material related to this; Chapter 33 on variational free energy minimization.)

I wanted to try this optimization out. The KL divergence between two Gaussians has a closed form but it seems this is not the case for mixtures of Gaussians. So let’s fake it by sampling our densities and using discrete distributions:

We get the expected result:

After I posted this Iain Murray linked to some nice further material on Twitter:

In particular Lecture 14, on approximating distributions by variational free energy minimization, covers much of this material.

It also sets the mathematical scene for what I’m intending to talk about next: Karl Friston’s Free Energy Principle, which applies extensions of these ideas to understanding the brain and behaviour.